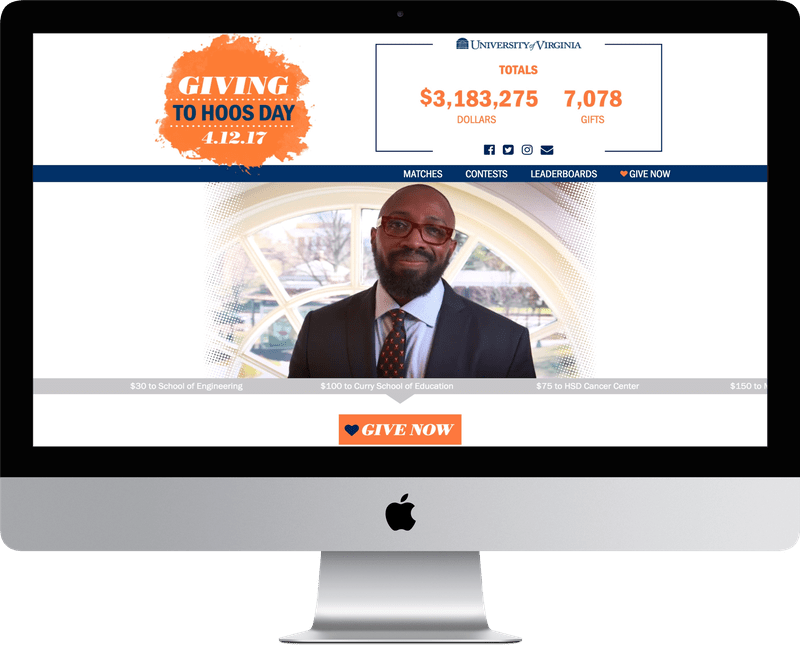 The site itself runs entirely on callbacks: effectively eliminating the need for a user to manually refresh their browser. Visual representations of giving (totals, leaderboards, and maps) are updated on an incremental basis and newly updated content areas are rendered using HandlebarsJS.

GivingToHoosDay 2017 also introduces new templates for UVA schools and programs to showcase their area on the official site. This allowed forty-three individual units to easily create and customize their page to engage with their audience.

The 2017 site relies on a newly introduced ReSTful API for retrieving up-to-date giving information. As in the 2016 version of the site, the API delivered data from our caching system that securely transmits, encrypts, and stores donation information.

GivingToHoosDay 2017 raised over three million dollars and 7,000 gifts: nearly one million dollars and more than 1,200 gifts more than GivingToHoosDay 2016. In addition, our website was the winner of the District III Council for Advancement and Support of Education (CASE) Grand Award, the top award for a category, for Fundraising Website or Microsite.